On 25 May, the Czech Dutch Chamber of Commerce, in cooperation with our patron member Taxperience, organized its second golf tournament. Representatives of around 50 companies from various business fields took part in the event which was hosted at The Duke Golf in Nistelrode, the Netherlands. The participants had an opportunity to enjoy the golf game as well as networking and meeting with new business contacts.

The winner of the tournament Mr. Huub Derksema van Apotheek ‘t Zuid received a challenge cup “The Duke Trophy”. The trophy, which was donated by the CDCC, was produced by AJETO, the Czech design glass company and a member of the Chamber. 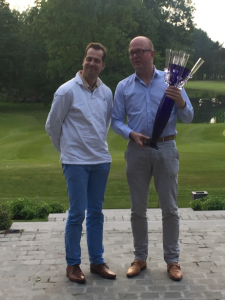